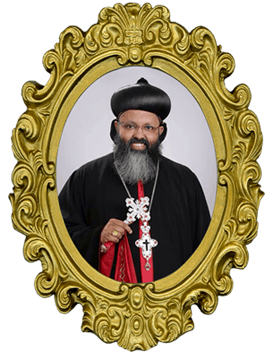 Born to late Mr. P. V. Pavu and Mrs. K. V. Anna on May 17, 1967, His Grace hails from a letter loving family, the famed Pulikkottil family from Kunnamkulam. He is the member of St Mathias South Cross Parish, Kunnamkulam, and author of over 10 publications.

His Grace has a post-doctoral research from the Friedrich-Alexander University of Erlangen (Germany) adding to diplomas in Sanskrit, Hebrew, Greek, Latin and German languages.

After his consecration as Bishop on May 12, 2010, Fr Geevarghese PulikkottilRamban became Pulikkottil Dr. Geevarghese Mar Yulius Metropolitan. As a priest, Rev Fr George Pulikkottil (PulikkottilAchen) from 1992 served in different parishes under dioceses of Kunnamkulam (Home Parish), Kottayam, Madras, UK & Europe, Canada and the Diocese of America.

He was lecturer and professor of religion and philosophy at Orthodox Theological Seminary Kottayam and Nagpur from 1994. He also served as the bursar of St Thomas Orthodox Theological Seminary, Nagpur. Other posts related to serving as Registrar of Divyabodhanam, Programme Secretary of Sophia Centre, the Kochi-based center for inter-religious dialogue and cultural studies, as a resource person for oriental studies, Associate Secretary of the Kerala Council of Churches, member of the Association of Professors and Research Scholars in Germany for Study of Religion since 2002.